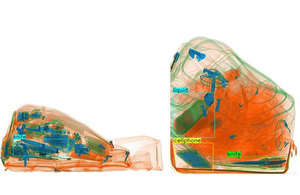 Dozens of new cutting edge bag scanners are being fitted at prison gates across 44 prisons to further strengthen the crackdown on drugs and phones behind bars, the Deputy Prime Minister has announced.

Over 80 high-tech X-ray machines will be installed by the end of March – building on the body scanners, drug-trace machines, metal detection archways and more that have stopped tens of thousands of items from wreaking havoc inside prisons.

For the first time, prisons beyond the high security estate will use the new, improved machines to check baggage brought in by the thousands of staff and visitors who enter and exit prisons every day.

To date, these machines have stopped huge hauls of illegal contraband from getting into prisons with recent finds including:

The most challenging 44 prisons will be the first to benefit from the machines – developed by VMI Security – which offer high-quality, sharp images to detect drugs, phones and high-density materials.

“These X-ray bag scanners are a powerful addition to the body scanners, drug-trace machines, metal detection archways and extra drug dogs we have added in recent years to keep drugs, mobile phones and other contraband out of our prisons.”

“This is getting more prisoners off drugs, and helping to keep our streets safer.”

The latest development follows the success of our 75 X-ray body scanners, across 74 male prisons, which have disrupted around 20,000 attempts to smuggle harmful items into prisons in 2 years.

Last year, dozens of prisons were also kitted out with new drug-trace machines that can detect microscopic smears of new psychoactive substances such as ‘spice’ on mail and items of clothing – stopping dangerous drugs from getting onto wings.

The £100 million investment into cutting-edge security across the prison estate forms part of the ambitious Prisons Strategy White Paper, published just over a year ago.

The comprehensive plan committed to making prisons safer, modern and more innovative for the thousands of people who work and are held in them – including a zero-tolerance approach to the smuggling of dangerous contraband which can thwart prisoners in their efforts to rehabilitate.

From:
Ministry of Justice and The Rt Hon Dominic Raab MP
Published
10 January 2023